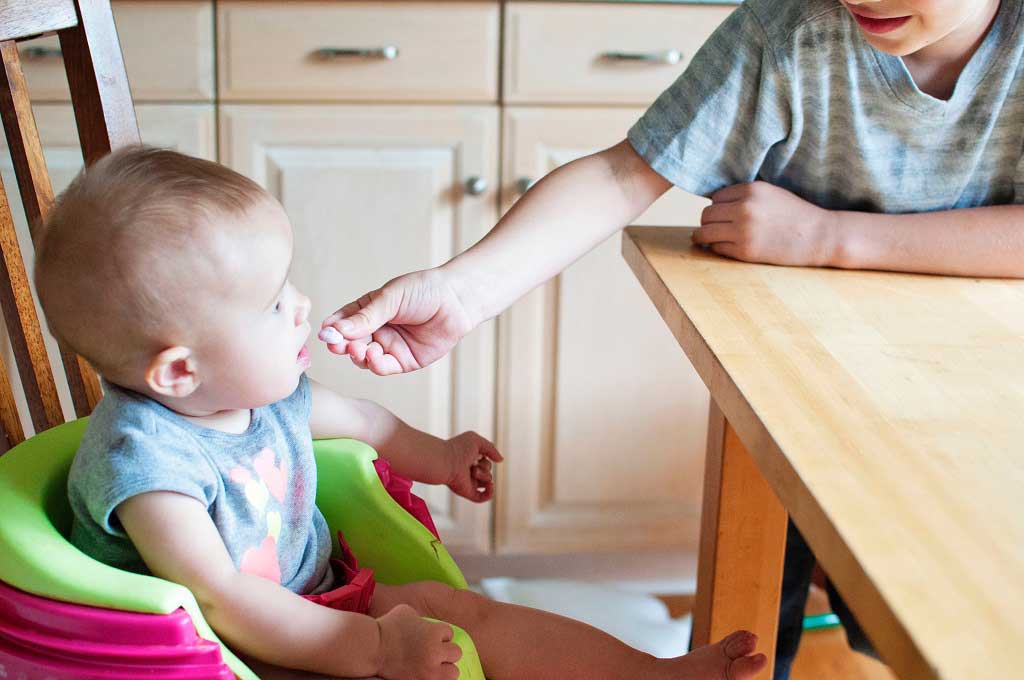 "Feeding your baby solids early may help them sleep," states The Guardian, which may catch the eye of many a sleep-deprived new parent.

The headline is based on the results of a new study that looked at 1,300 healthy, exclusively breastfed 3-month-old babies in England and Wales.

The babies were assigned at random to either trying to start solid foods (including some foods that can cause allergies) from the age of 3 months or 6 months (the current NHS recommendation).

Overall, the study found that at 6 months of age, babies in the early solids group slept for an average of 17 minutes longer than those who were only just starting solids.

They also woke 2 times less at night over a week. The differences between the groups got smaller after 6 months.

This study's strengths include its good design and large size. It's possible its findings may influence NHS guidance about introducing solid foods, but it'll need to be considered by experts alongside other relevant evidence.

Some of the study's findings seem to suggest that some babies may be more ready than others to start solids early.

Parents thinking about starting their babies on solids before 6 months of age should check with a health visitor or GP first.

It's also important to note that all the mums in the study were encouraged to continue to breastfeed even if they started solids early, and almost all did.

The study was carried out by researchers from St George's and King's College London, and the Immune Tolerance Network at the Benaroya Research Institute in the US.

It was funded by the UK Food Standards Agency, the Medical Research Council, the UK National Institute for Health Research (NIHR), and the Davis Foundation.

The study was published in the peer-reviewed journal JAMA Pediatrics.

The UK media's take on the study varies from source to source. BBC News, for example, gave fair coverage and made it clear that for now parents are still advised not to introduce solids before 6 months, though they say this recommendation is under review.

Meanwhile, the Mail Online suggested that feeding babies solids from 3 months could improve both their sleep and long-term health. While the study does suggest some improvement in sleep, it didn't look at the effect on long-term health.

The Guardian provided some interesting independent expert opinion, including from Professor Amy Brown of Swansea University, who said: "There is no clear physiological reason why introducing solids foods early would help a baby sleep."

She also pointed out that "self-report[ing] of infant sleep by tired parents was unlikely to be precise".

This was an analysis of results from a randomised controlled trial (RCT) called the Enquiring About Tolerance (EAT) study.

This study mainly aimed to see whether introducing babies to potential allergy-causing foods early (at about 3 months) would reduce the risk of developing allergies to these foods later on.

The researchers also looked at whether the babies who were introduced to solid foods earlier slept better.

Current NHS advice says ideally babies should be exclusively breastfed for 6 months. You can start to introduce solid foods after this.

This type of study is the best way to objectively look at the effects of making a single change, such as the early introduction of food.

Randomised trials looking at baby feeding are uncommon, as researchers have to prove that it's ethical and likely to be safe to carry out the research.

In the EAT trial, researchers enrolled 1,303 breastfeeding mums and their 3-month-old babies to take part in the study.

They randomly allocated about half of these mums to start introducing solid food early (at 3 months) and the other half to wait until 6 months (the current recommended age for weaning).

They then compared how well the babies slept (as well as other outcomes) up to the age of 3 years.

Only healthy babies born at full-term and who were exclusively breastfed were allowed to take part in the study.

All mums were encouraged to continue to breastfeed up to the age of 2 years or later, as recommended by the World Health Organization.

The mums of babies who started solids early were encouraged to continue breastfeeding, but also to start their babies on solids from 3 months.

In the first week they were asked to introduce foods unlikely to prompt allergic reactions, such as baby rice and puréed fruit and vegetables.

After this, they were advised to gradually start introducing 6 foods that are commonly linked to allergic reactions:

They were advised to give their babies 2 grams of each of these foods twice a week.

The mothers of babies starting solids at 6 months weren't given any specific instructions about how to introduce solids.

Families were sent monthly questionnaires online for a year, and then every 3 months until the child turned 3 years old.

The questionnaires included standard questions on:

The mothers' quality of life was also assessed when their babies were 3 months, 1 year and 3 years old by way of a standardised questionnaire.

Parents in the early solids group reported that they found it hard to get their baby to eat the full recommended amounts over the 3-month period.

The babies in the early solids group slept for longer and woke less frequently than the comparison group. The difference was greatest when the babies were 6 months of age, and got smaller after that.

Babies who started solids early were also less likely to have "very serious" sleep problems as reported by their parents (odds ratio [OR] 1.8, 95% confidence interval [CI] 1.22 to 2.61).

But these problems were uncommon. At their peak at around 10 months, around 2-3% of the early solids group were reported as having "very serious" sleep problems by their parents, compared with 4-5% of the comparison group.

Effects were greater in the babies who did manage to eat the recommended early solids diet.

The researchers concluded that this was the first time a randomised trial had shown that early introduction of solids has a small but statistically significant effect on sleep.

Current NHS advice says babies should ideally be exclusively breastfed for 6 months, and solid foods should be introduced after this.

But a survey from 2010 suggested about three-quarters of parents had introduced solids by 5 months.

One of the reasons the parents started giving solids early was because their babies woke in the night.

This new research suggests that babies may well sleep better if they start solids a bit earlier, at 3 months.

But parents should bear in mind that the effect was small – on average, babies only slept about 17 minutes longer a night.

Babies who were more able to manage to eat the early solids diet were also better sleepers at the start of the study. This suggests that these babies may have been developmentally more mature.

It's also important to note that all of the babies who took part in this study were healthy and were born at full-term (37 weeks or later into the pregnancy).

Babies born preterm may not be as developmentally ready to eat solids from 3 months of age.

Parents shouldn't be unduly concerned that not feeding their babies solids from 3 months will lead to "very serious" sleep problems.

The babies reported to have these problems tended to wake more often and sleep less, and this unsurprisingly affected their parents' quality of life.

But the overall rate of such problems was low at less than 5%. It's difficult to know for certain how severe these problems were as the babies weren't assessed by health professionals or monitoring devices to measure their sleep patterns.

NHS advice is based on the best evidence available at the time, and it can change as new evidence becomes available.

It may be revised in light of this study, as previously much of the evidence is likely to have come from observational studies, where it's difficult to single out the impact of babies' diets.

Before this happens, these findings will need to be reviewed by experts, who can take this and other sources of evidence into consideration.

If parents want to introduce solids earlier than 6 months, it's probably best if they discuss this with their health visitor or GP.