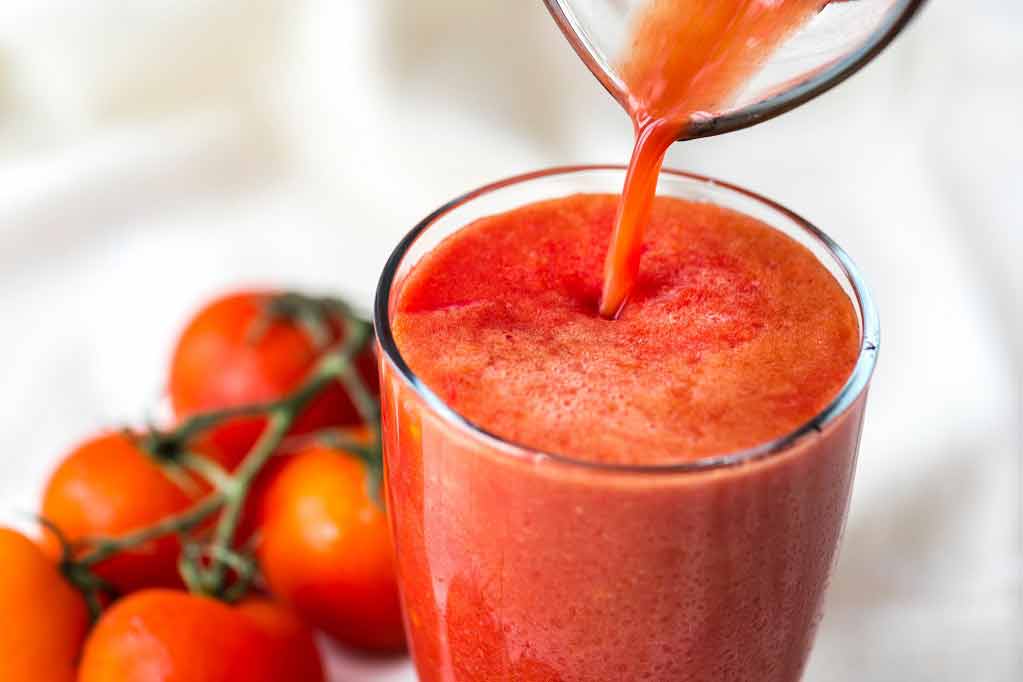 "Drinking tomato juice can reduce your risk of heart disease," is the overenthusiastic headline in the Daily Mirror.

Japanese researchers offered people free tomato juice for a year, to see if it made a difference to their blood pressure or cholesterol levels. While it made no difference to the 481 people in the study overall, the researchers found that people with raised blood pressure (94 people) or LDL ("bad") cholesterol (125 people) did have a small drop in their levels. Whether this change had any clinical significance is unclear.

There was also no comparison group. So we do not know about people's diet during the study period. Also less than half the people in the study completed a questionnaire about lifestyle and medical treatment. It is impossible to tell if the results had anything to do with tomato juice or could be related to other factors.

With the weak study design and the small sample of Japanese people with blood pressure or cholesterol problems who may not be representative, this overall represents rather poor evidence that tomato juice is good for the heart.

While tomato juice can be part of a healthy, balanced diet, experts recommend no more than one serving (150ml) of fruit juice a day, which can count towards your "5 A Day" fruit and vegetable target. Because fruit juice is high in sugar (7.2g of sugar in each 200ml bottle in this study), it can be easy to consume more sugar and calories than you intend.

Find out more about how to eat a healthy diet that protects against heart disease.

The study was conducted by researchers from the Tokyo Medical and Dental University and the Plant Breeding Institute, both in Japan. It was funded by Kikkoman Corporation, a food manufacturer, and published in the peer-reviewed Food Science and Nutrition journal on an open access basis so is free to read online.

The study was funded by Kikkoman Corporation, a Japanese food company that produces tomato juice, as well as many other products. The lead researcher was given a grant from Kikkoman to conduct the study, which the authors do acknowledge represents a conflict of interest.

Reports in the Daily Mirror and Mail Online were mainly uncritical, although they did include comments from UK experts that cautioned against accepting the study results. Neither report included information about the study funding or conflicts of interest.

The Daily Mirror said that: "a new study suggests that drinking Bloody Marys could help to reduce your risk of heart disease", which is incorrect and misleading. The study looked at unsalted tomato juice, not a vodka cocktail.

This was an observational study that compared people before and after being given tomato juice.

The best type of study if you want to find out the effect of an intervention (such as tomato juice) is a randomised controlled trial. This is where you would randomly assign some to receive the intervention and others to a control or comparison group (in this case no tomato juice or another juice, for example). This should balance out any other health and lifestyle characteristics that may differ between people and ensure you could measure the direct effect of the intervention.

This study simply offered free tomato juice to people and measured their blood pressure and cholesterol before and after. That means we do not know if any change in measurements was due to the tomato juice or to something else.

Researchers advertised the study with flyers and briefing sessions in the Japanese town of Kuriyama, encouraging people to take part. They gave the 541 people who signed up as much unsalted tomato juice as they wanted for a year. People were asked to record how much tomato juice they consumed every day and their diaries were collected every 3 months.

Researchers looked at people's blood pressure and cholesterol before and after the study to see if they had changed. They also looked at a sub-group of people with high blood pressure of 130mmHg systolic or 85mmHg diastolic or above, and people with LDL cholesterol of 140mg/DL or above. It is not clear whether this was a pre-planned subgroup analysis, or carried out after looking at the overall results.

The researchers looked to see if people's lifestyle changed during the year of the study, to see if that could account for any change in blood pressure or cholesterol.

Of the 541 people who started the study, 60 were excluded from the results. The researchers said this was because they did not take part in the second medical examination, did not keep records of tomato juice consumption, or the researchers lost touch with them.

Of the remaining 481, the average consumption of tomato juice was about 1 bottle (200ml) a day (215ml, plus or minus 84ml). The researchers excluded from the analysis 9 people who consumed less than 100ml (half a bottle) a day.

There was no difference in blood pressure, cholesterol or any of the other factors measured (such as body mass index or blood glucose control) for the overall study group.

Researchers then looked separately at the 94 people found to have raised blood pressure at the start of the study. They found:

They also looked separately at 127 people found to have raised cholesterol at the start of the study. They found:

Only 260 people in the study completed the lifestyle questionnaire – less than half of those who began the study. The researchers say they found no evidence that people changed their lifestyles during the study.

This study has important limitations to its design and we cannot draw reliable conclusions from the results.

First, this was not a randomised controlled trial. The lack of a balanced comparison group means we cannot tell whether tomato juice had any effect on people's blood pressure or cholesterol.

If people had higher blood pressure or cholesterol they might have started to receive medical treatment, such as blood pressure drugs or statins, or to have changed their diet in other ways (something the lifestyle questionnaire did not assess). These might be the reasons why this group was found to have improved measurements at the end of the study – it may have had nothing to do with tomato juice.

The researchers did make some attempt to pick up on other lifestyle changes that could account for the results through the lifestyle questionnaire, but this was completed by less than half of the participants. We cannot assume that the participants who did not complete it would have delivered the same results.

Then the overall results found no effect of tomato juice. The researchers found an effect when looking at a sub-group of participants. But we do not know whether they originally planned to look at this sub-group, or whether when examining the results deeper they found this positive effect, and included it in the report. This type of "post-hoc" analysis is not so reliable.

There are various other limitations to this sub-analysis. We do not know whether the small changes would have made meaningful clinical significance to the person's health. This was a small sub-group of people with high blood pressure and cholesterol who may not be representative of the general population with these chronic conditions. Then, even if this were a direct effect of tomato juice, it's completely unknown how much juice a person would have to consume and whether it would have to continue on a long-term basis.

Tomato juice may have health benefits, but we cannot tell that from this study. Meanwhile, if you enjoy tomatoes and tomato juice as part of a balanced, healthy diet, there's no reason not to continue to do so.