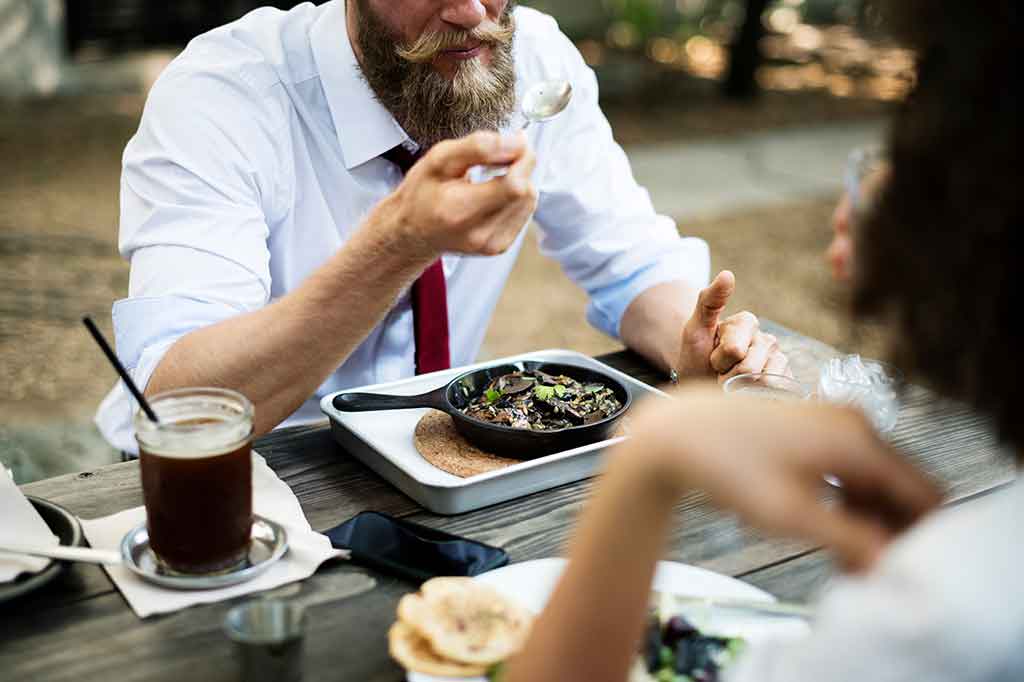 "Eating slowly may help prevent obesity, say researchers," reports The Guardian. Researchers in Japan found that people who said they ate slowly or at normal speed were less likely to be obese at the end of a 6-year study, than those who said they ate quickly.

The study used data from health checks with 59,717 Japanese people who had type 2 diabetes. The researchers wanted to see if eating speed and some other eating behaviours, such as snacking after dinner, affected obesity.

However, very few people changed their eating speed during the course of the study.

They found that people who ate slower were less likely to be obese; but we don't know from this study whether changing your eating speed would work as a weight-loss strategy.

Hypothetically, it makes sense that eating more slowly might lead to eating less. Experts say that when we eat quickly, our bodies don't have time to register the hormonal changes that signal when we are full.

Eating more slowly may help to reduce the amount of calories we eat but because this study didn't look at calorie intake or diet, we don't know if calorie intake explains the findings.

The fact that the study was carried out in Japan, where diet, lifestyle and the prevalence of obesity are different, mean the results may not translate directly to the UK.

That said, some general advice provided by the study would seem to apply to all cultures. This includes not skipping breakfast and limiting evening snacks.

The study was carried out by researchers from Kyushu University in Japan, with funding from the Ministry of Health, Labour and Welfare of Japan. It was published in the peer-reviewed journal BMJ Open, which is available to read free online.

The study was covered uncritically, but with reasonable accuracy in The Times, The Sun and the Mail Online. The Guardian highlighted the limitations of the study, including the small numbers who actually changed eating speed.

This was a cohort study using annual health data recorded over a maximum of 6 years.

Researchers wanted to see how eating speed over time, and a range of other eating behaviours, affected people's likelihood of being obese. They focused their analysis on people with type 2 diabetes as obesity is a known risk factor for this condition. The researchers felt this group could benefit most from any observations.

Observational studies can demonstrate links between factors such as eating speed and obesity, but they cannot prove that one factor (such as eating quickly) directly causes another (such as obesity). A wide range of other unrecorded factors (amount of food consumed, physical activity, etc) may affect the results.

Researchers used health check data collected over a 6-year period from 59,717 Japanese people aged over 40 who had been diagnosed with type 2 diabetes. As part of a government scheme, all adults over 40 enrolled with health insurance companies are invited to attend health checks to detect risk factors for obesity and metabolic syndrome (a combination of diabetes, high blood pressure and obesity).

At the health checks, people were asked about a range of eating behaviours, including:

They also had their body mass index (BMI) calculated, their waist size measured, and were categorised as obese or not obese. It is worth noting that in Japan a BMI of 25 or over is considered obese, whereas in the UK 25 to 29 is overweight and only 30 and above is considered obese. (East Asian people tend to have smaller body sizes than European people, which is why the BMI threshold for obesity is different).

People were offered annual health checks, but as they entered the study at different stages after their diabetes diagnosis, most did not have 6 sets of results.

The researchers used a variety of statistical models to look at how people's stated eating speed, and any change over the time of the study, influenced their chances of being obese at the end of the study.

They considered these potential confounders:

Fast eaters were also more likely to be men and to eat dinner within 2 hours of bedtime.

Compared to fast eaters, by the end of the study:

The researchers said their findings "indicate that weight loss can be supported through the reduction of eating speed". They also say that eating dinner more than 2 hours before sleeping, not snacking after dinner and always having breakfast may also help weight loss.

The scale of the obesity crisis means that any findings that help people to avoid obesity are welcome.

However, there are limitations to this study that we need to take into account:

Few people in the study changed from fast to slow eating, so the proposed benefits from eating slowly are only theoretical. We don't know whether people would lose weight if told to eat more slowly, or how easy it is to change eating speed.

Still, it seems likely that eating slowly might reduce the amount of calories we consume, either because we have time to recognise signals that we've eaten enough, or because by eating slowly we can't cram as many calories into a set eating time. So, if you are trying to lose weight by eating less, or to control the calories you eat to maintain a healthy body weight, eating more slowly may help.

Find out more about how to lose weight.