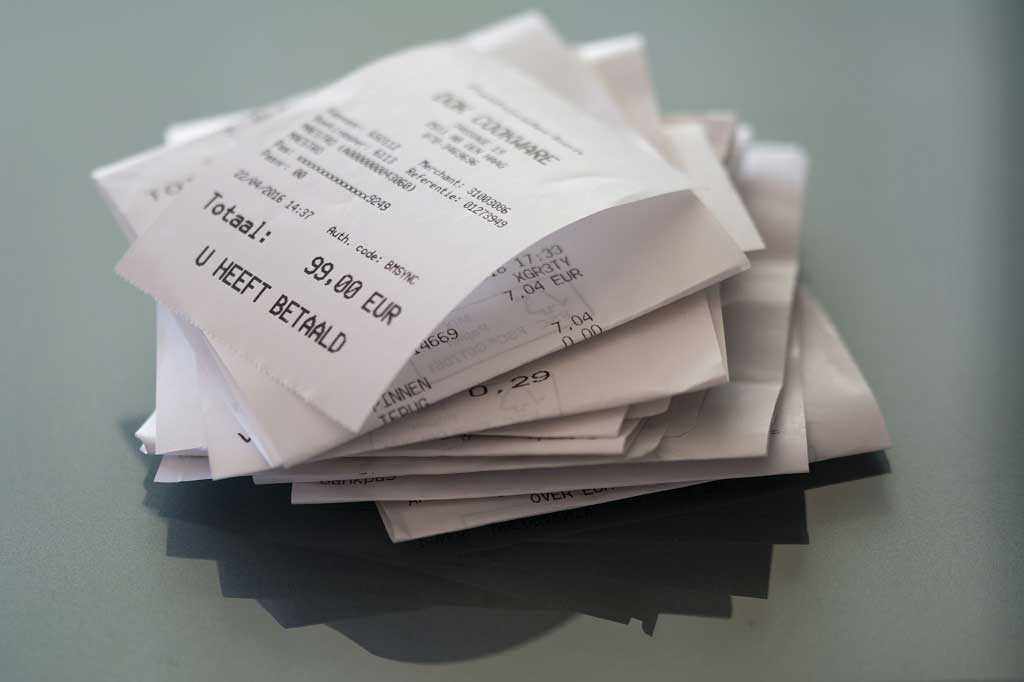 "Up to 90 per cent of receipts contain cancer-causing chemicals, experts have warned," the Mail Online reports. In a new study, researchers looked at ...

"Up to 90 per cent of receipts contain cancer-causing chemicals, experts have warned," the Mail Online reports.

In a new study, researchers looked at whether the chemical bisphenol A (BPA) could be found in shop, till, cashpoint or similar types of receipts.

BPA used to be widely used in the manufacture of plastics and resins. It's now less widely used because of health concerns that exposure to BPA could cause a range of health problems, such as obesity, heart disease and prostate and breast cancer, as it can disrupt the effects of certain hormones.

While there's no "smoking gun" proving that BPA causes cancer in humans, some health professionals have expressed concern.

For example, the charity Breast Cancer UK has called for a ban of BPA from food and drinks packaging.

Researchers found BPA in between half and 95% of receipts collected in France, Spain and Brazil.

These were all receipts printed on thermal paper, which has a coating that allows heat instead of ink to mark the paper.

Shop workers and waiting staff have been found to have higher levels of BPA in their urine, probably as a result of constantly handling receipts.

The European Union has markedly lowered daily intake guidelines for BPA and will reduce its presence in thermal paper from January 2020.

But the researchers warn that the chemicals being used to replace BPA in some countries (such as bisphenol S, or BPS) may not be safe, as they may also disrupt hormones.

The researchers are reported to have recommended that people throw these types of receipts in the rubbish bin when no longer required.

The researchers who carried out the study were from the Insituto de Investigación Biosanitaria de Granada in Spain, Université Paris Descartes in France, and the Oswaldo Cruz Foundation in Brazil.

The study was funded by the European Union Commission, the Institute of Health Carlos III, the Spanish Ministry of Health, Andalusia Regional Government, and the Spanish Consortium for Research on Epidemiology and Public Health.

It was published in the peer-reviewed journal Environmental Research.

Most of the UK media coverage repeated concerns that BPA may cause cancer, which is not proven.

This was experimental laboratory research to test BPA levels in a sample of till receipts and look at the hormonal activity of the chemicals found on the receipts.

The study did not test the safety or otherwise of the chemicals, or look at the potential for the chemicals to transfer to people.

The researchers do not say how the samples were chosen, although they describe them as having been "randomly collected".

Researchers used chemical tests to analyse the chemicals in the receipts.

They also introduced extracts of the samples into laboratory-cultured cells to test their effect on hormone activity.

They presented their results to show the proportion of samples containing BPA or BPS, concentrations of the chemicals, and the proportion showing hormone-like activities.

Researchers found 75.9% of samples contained BPA. This ranged from 51.1% of French receipts to 90.9% of Brazilian receipts and 95.3% of Spanish receipts.

BPS was detected in 21.3% of French receipts, suggesting it was the most commonly used substitute for BPA.

Concentrations of BPA were:

Recommended EU levels for BPA concentration in thermal paper are planned to be 0.2mg/g from 2020.

All the samples from Brazil and Spain showed oestrogen-like effects (hormone-disrupting effects) in cells, while 74.5% of samples from France did so.

Researchers said the French samples that did not show oestrogen-like effects were those without BPA or BPS.

The researchers said this was the first study "to describe the estrogenic and anti-androgenic activity [hormone disruption] of thermal paper extracts" and that the results of these activities "were influenced by their BPA content".

But they added other compounds in the receipts might also have been involved. They called for further studies "to assess the safety of the proposed alternatives to BPA as a developer in thermal printing".

The study found the use of BPA and similar chemicals in receipts is common in Brazil, France and Spain.

While UK receipts were not sampled in the study, it's possible that BPA is also common in receipts issued here.

The British Retail Consortium is reported in the Metro as saying its members were "aware" of the issues around BPA and were reviewing its use.

The research was not just limited in terms of geographical scale. The number of samples collected was small and the method of collection not explained, so we do not know whether the results are really representative of the level of use of BPA and BPS in receipts.

The study does suggest BPA in thermal paper may have hormonal activity, but we do not know how much BPA transfers from receipts into the human body with normal use.

Most importantly, we do not really know the effects of BPA on the human body.

For people who wish to avoid taking the risk, the researchers told newspapers that they should fold receipts inward, not crumple them up or handle them unnecessarily, not store them in pockets or wallets, and throw them in the rubbish when no longer required.